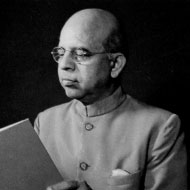 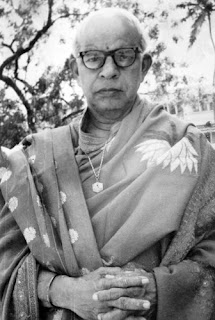 
Venkataraman Raghavan (1908–1979) was a Sanskrit scholar and musicologist. He was the recipient of numerous awards, including the Padma Bhushan and the Sahitya Akademi Award for Sanskrit, and authored over 120 books and 1200 articles.


He authored several books on music and on aesthetics in Sanskrit . In 1963, he edited and translated Bhoja's Śṛṅgāra-prakāśa, a treatise in 36 chapters dealing with both poetics and dramaturgy, and the largest known work in Sanskrit poetics. For this work and his commentary, he won the Sahitya Akademi Award for Sanskrit in 1966. He was awarded the prestigious Jawaharlal Nehru Fellowship in 1969. It was later published as volume 53 of the Harvard Oriental Series in 1998.


He translated into Sanskrit Rabindranath Tagore first drama, Valmiki Pratibha, which deals with the transformation of Valmiki from a bandit into a poet.

He founded an organisation, Samskrita Ranga in 1958, that deals with Sanskrit theatre and has enacted Sanskrit plays.

He was known both for his command of primary texts and for making them accessible through his articles and commentaries.

He worked on The New Catalogus Catalogorum(NCC), the major project of his official career; toured Europe in 1953-54 and besides attending International Conferences, prepared an inventory of 20,000 uncatalogued manuscripts there and a survey of Sanskrit and Indological studies in Europe; toured U.S.S.R. in 1958 and 1974; visited for lectures, conferences, study and examination of manuscripts collections, the Countries of East and South East Asia, Australia, Mauritius, Canada and Mexico and visited Nepal twice for manuscripts Study.

As a musicologist, he specialized in Carnatic music. He was the secretary of the Music Academy, Madras from 1944 until his death. A "Dr. V. Raghavan Research Centre" has since been named after him.


On his birth centenary, celebrations were held in August 2008. A book Smriti Kusumanjali was released, compiling tributes to him on his 60th birthday from personalities including then-president Dr. S. Radhakrishnan and vice-president V. V. Giri.

"No work on Indian aesthetics is complete without its quoting Dr. Raghavan"

Raghavan was born in 1908 at Tiruvarur, Tanjore District of south India (Tamil Nadu). He graduated from Presidency College, Madras in 1930 with 3 College Prizes and 5 University Medals. He received his M.A. in Sanskrit Language and Literature with Comparative Philology and four schools of Indian Philosophy under Mahamahopadhyaya Prof. S. Kuppuswamy Sastri; specialized in Alamkara and Natya Sastras and Sanskrit Aesthetics and earned his Doctorate in 1934-1935 from Profs. S. Levi, F.W. Thomas and A.B. Keith; studied Sanskrit on the traditional lines also and won medals and prizes for Sanskrit speaking and writing. After a brief Superintendship of the Sarasvati Mahal Manuscript Library, joined the research department of his Alma Mater, Madras University where from the position of a Research Scholar, he rose to that of Professor and was Head of the Department of Sanskrit till 1968.

His daughter, Nandini Ramani, is an art critic.